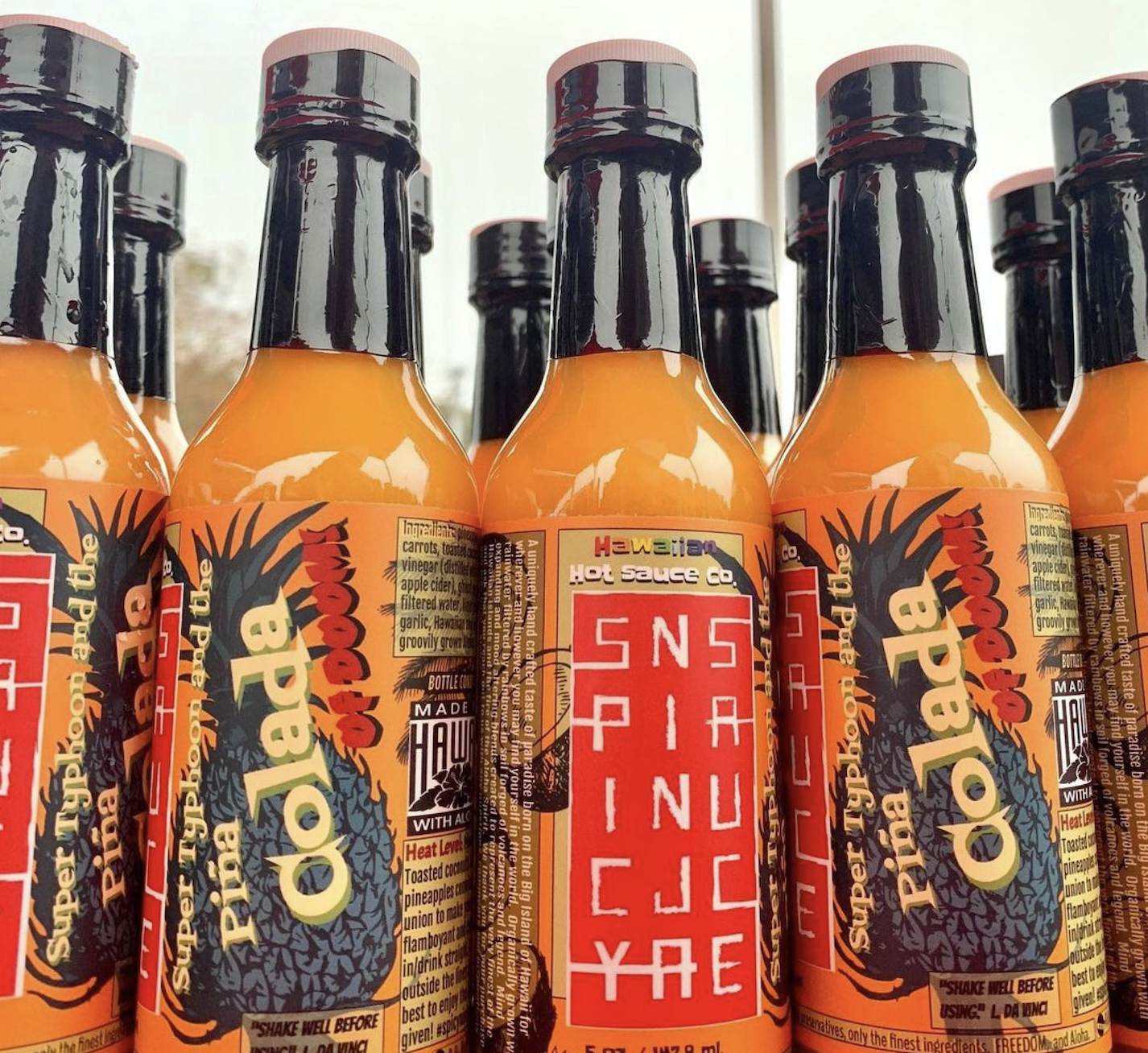 “Infused with the fire of the aloha spirit,” Spicy Ninja Sauce is on a mission to help Hawaii’s farmers and to bring new meaning to “made in Hawaii,” all while creating bold and delicious Hawaii-inspired hot sauces. Started with $200 and three peppers, as founder Christopher Bornstein explained, Spicy Ninja Sauce now has 20 different creatively-named and crafted vinegar-based hot sauces, all 100% grown, made, and manufactured locally. The company centers around agriculture and what’s best for Hawaii and is starting a nonprofit organization called Rogue Panda Farms with a goal of growing tons of food to give away for free.

Nothing says spice like “God Fearing Monkeys and the Bengali Spice Pirates” or “Advanced Tactical Weaponized Starfruit Death Star,” and these are only two of Spicy Ninja Sauce’s unmissable hot sauces. Centered around local fruit, the sauces incorporate Hawaiian flavors and organically-grown ingredients and are vegan and gluten-free with nothing artificial. “We source from as many local farms as we can,” said Bornstein, adding that he grows carrots, beets, bananas, papayas, peppers, herbs, and other crops for the hot sauces as well. “We feel that nothing is more important than the ingredients. Without good ingredients, even if you have good taste, you won’t have good health,” Spicy Ninja Sauce mentions on their website. Because of this love and care for ingredients, Spicy Ninja Sauce has been called a health food in addition to the best sauce people have ever had. So many intriguing hot sauces, but which to try first? “Everyone should try the OG,” said Bornstein, referencing the first hot sauce, called “S.N.S. OG – Three Wrongs Make a Right.” The name is in reference to Bornstein’s three not-so-great first creations during experimentation and the incredible and best-selling invention that was born when he mixed those three sauces together. Bornstein’s personal favorite, “God Fearing Monkeys in the Temple of the Sweet Chili Bang Bangs,” is on the hotter side and includes “God Fearing Monkeys” to mean bananas are an ingredient. In addition to these unique hot sauce creations, Spicy Ninja Sauce offers salt blends and infused honey.

Spicy Ninja Sauce is always looking toward improving the future, as explained on their website. Their commercial kitchen is entirely solar powered, also helping Hawaii’s sustainability. The company is helping to increase agricultural production in Hawaii and put more local foods on shelves, erasing the large need for importing goods. “We should always have fruits and vegetables in the grocery store,” said Bornstein in response to shipping delays causing empty grocery store shelves during the pandemic. “It shouldn’t be a problem, but it is. That’s what I’m hoping to change.” Meanwhile, Rogue Panda Farms will grow tons of food to give away. Bornstein is looking for someone to direct the nonprofit, which has already been accepted by the North Kohala Community Resource Center. “We are looking for someone to grow on something that has already been built,” he explained, encouraging anyone interested to reach out to him via ninja@spicyninjasauce.com. On a more futuristic note, Spicy Ninja Sauce donates lots of hot sauce to planetary societies and wants to be the first hot sauce on Mars, as this historic hot sauce should be one truly from Hawaii.

The “mind expanding” hot sauces from Spicy Ninja Sauce can be found in local CSAs and in their online store. Bornstein also mentioned that anyone interested in trying the known-to-be-drinkable sauces can send him an email mentioning they saw this Food-A-Go-Go article. As Spicy Ninja Sauce works to expand and make a bigger impact for Hawaii agriculture, the Big Island based company is looking for people interested in being a representative on other islands, especially Oahu, and doing Farmers’ Markets or helping in other ways. For more information about Spicy Ninja Sauce, click here.