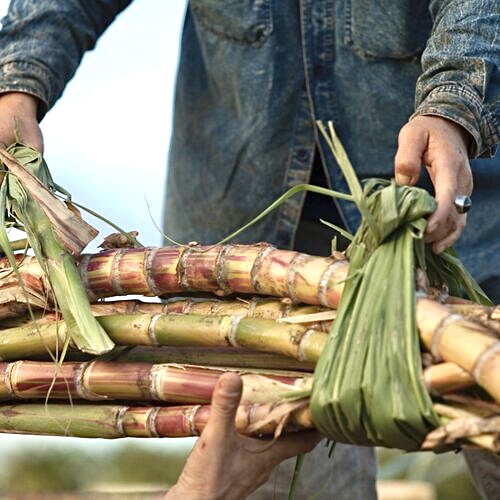 Heirloom Hawaiian sugarcane once again grows proudly across hundreds of acres on the central and north shores of Oahu. Kō Hana Farms, the sister company of Kō Hana Distillers, cultivates over 30 varieties of kō, or sugarcane. Each cane variety has distinctive coloring, leaf patterns, flavors, and places in local culture. Farm Manager Derek Sheldon said, “It’s humbling to be part of a stewardship project that has allowed these canes to thrive again, and to share and connect people with the stories that underlie these special plants.” Honoring and celebrating the kō, Kō Hana has created an award-winning agricole rum that delivers an experience built on the rebirth of the heirloom Hawaiian sugarcane.

The farm-to-bottle process starts with the many single varieties of sugarcane, each with specific characteristics, planted on the farm. Kō Hana Farms is one of the largest sugarcane and cacao growers in Hawaii. “We cherish sugarcane varieties much like a winery cherishes the grape,” Kō Hana states on their website. The cane is hand-harvested, and the specific varietal used in each rum is written on the bottle. The cane is then pressed to juice, highlighting the “earthiness and sweetness” of the plant. “Fresh sugarcane juice is the star ingredient in an agricole style rum,” General Manager Kyle Reutner explained, adding that agricole rum is the French style of rum making, which “celebrates the true essence of the plant.” This style separates Kō Hana from a traditional rum, which relies on molasses or other sugar sources. It also mandates that certain aging rules are followed, “ensuring that balance has returned to the liquid after the distillation process.”

Aged rums are rested in Kō Hana’s barrel house, full of barrels unique to Kō Hana and some from around the world. American oak elicits flavors such as vanilla, caramel, cinnamon, rock candy, and banana blossom from the rum, making each sip a flavor journey. The deeply colored Kōa wood barrels, likely the first of their kind, produce a rich, beautiful, red spirit. Kō Hana’s KILA, a newly launched special rum, finished its aging in an Oloroso sherry cask.

One of Kō Hana’s most popular rums is KOKOLEKA, which “represents three Hawaiian farms coming together in one bottle,” Reutner mentioned. Named with the Hawaiian word for chocolate, this spirit is made with Kō Hana’s heirloom sugarcane, Hawaiian cacao, and Hawaiian honey from hives on Oahu.

Kō Hana is proud to nurture and grow such a diverse and important crop and to invite the community to learn about the different varieties of Hawaiian sugarcane in their tasting room. Guests learn about the individual varieties and sample different types, sometimes tasting the raw cane itself. “People really come to learn and to experience the flavors in side by side comparisons expressed as agricole rum,” shared Reutner. In addition to a tour or tasting in Kunia, you can find Kō Hana rum on the drink menus of most restaurants across Hawaii or take home a bottle from your neighborhood liquor or grocery store. For those out of state and looking for a taste, Kō Hana is quickly expanding its distribution throughout the US and Asia. Kō Hana is also proud and humbled to mention their pivot and call to action during the beginning of the pandemic. The distillery diverted much of the ethanol used to make rum into the production of a locally made FDA registered hand sanitizer. Together with a hui of local companies, Kō Hana donated thousands of gallons of hand sanitizer to our first responders, homeless shelters, and the community at large. For more information about Hawaiian sugarcane, agricole rum, or Kō Hana in general, click here